Along with Mount Greville, Mount Cougal is often considered one of the best half-day mountain walks in South East QLD. I set out this weekend to see if it would live up to its reputation.

The track up to the Cougals begins just inside a property gate along a dirt road. A sign hanging on the fence just through the gate is a friendly reminder to keep to the fence line, as immediately on either side is private property! 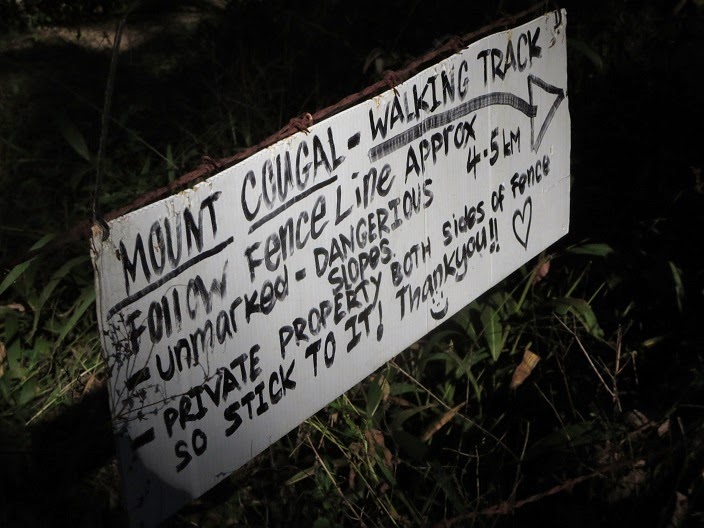 This fence is actually the borderline between QLD and NSW, and leads all the way to the base of Mount Cougal east peak.

The first half an hour of walking is fairly steep uphill, running through overgrown lantana and sugarcane (often over head height). This has to be about the worst 30 minutes of bushwalking I can remember doing. I was battered by the dew-covered plants until my clothing was soaked through, as though I'd just been wading in water! Because the growth was so thick, it was difficult to see my footing and I was essentially walking blindly with my arms out to push away the plants. Gaiters would have been welcome here. Something that made this section more enjoyable was the very noticable melodies of various rainforest birds, seemingly more than usual for a bushwalk. I was even lucky enough to spot a female whip bird within moments of entering the gate, no more than a metre or two away!


After what felt like an eternity, the track levelled out and there was some relief from the tall grasses and some reasonable views towards my destination: the twin Cougal peaks.


Eventually the path departed from the high grass hell and emerged into rainforest. Shortly afterwards there was a tree apparently blazed by F.E. Roberts, the surveyor responsible for defining the QLD-NSW border in 1864. 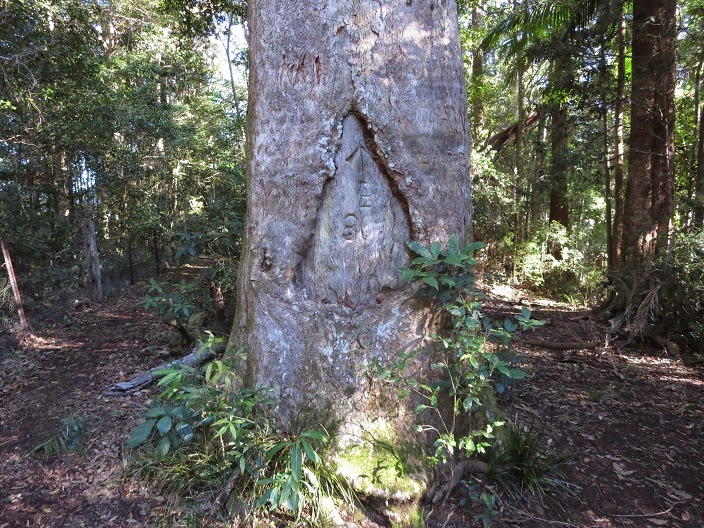 The track winds up and down along the ridge, sometimes veering to the NSW side of the fence where fallen trees have made directly following the fence impossible. 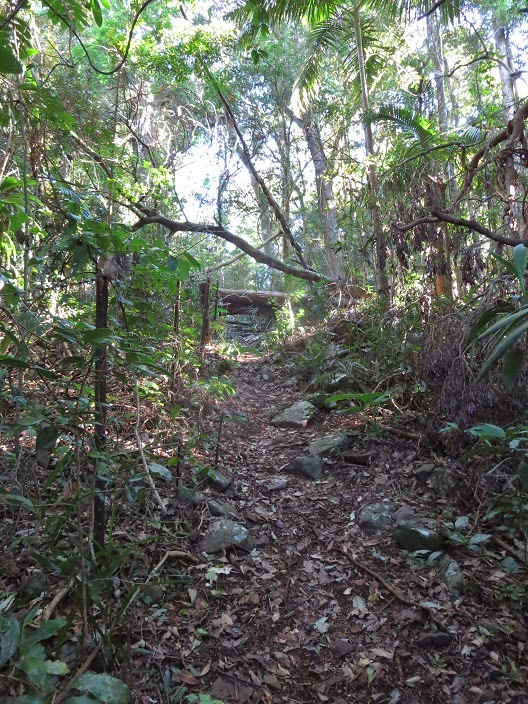 The final stretch leading to the base of the east peak is extremely steep, probably the steepest non-rocky track I can remember walking. It's tempting to grab a hold of the barb-wired fence for support, but thankfully it's not exposed or slippery (at least not in dry weather). 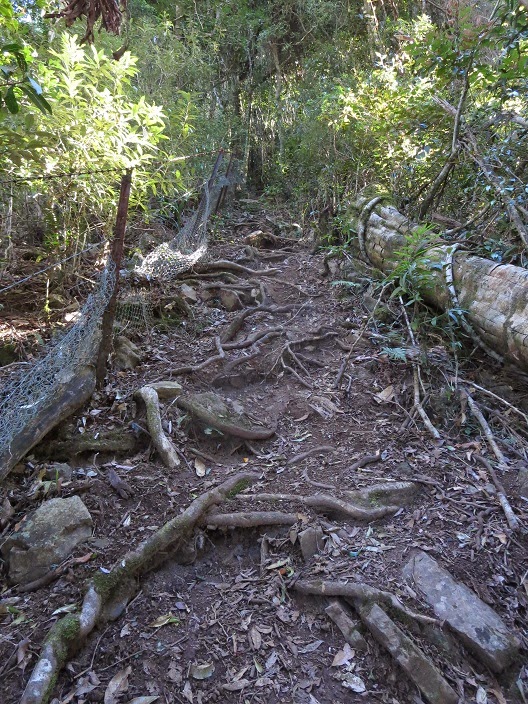 At this point the fence disappears and you have to skirt around the small cliff to try and make your way up to the eastern summit. Unfortunately the departure point was not obvious and I contoured too far to the right, taking (as I later realised) a rough route that swings around the east peak and leads to the saddle between the two peaks. This was particularly precipitous and required some caution. It's probably a quicker route to the west peak but I wouldn't recommend taking it.

I finally made it to the east peak by taking the steep route from the saddle, about 1 h 40 min after starting out. Fantastic views from the top easily made up for the tough climb to get there (although perhaps not enough to nullify the first horrific 30 minutes through the high grass). The west peak with its steep, rocky sides and green forest cover reminded me of Wayna Picchu, the precipitous summit behind Machu Picchu on the Inca Trail. Except choked with spear lillies. With the Springbrook and Lamington NPs beyond, it was certainly a treat to behold.


From the eastern peak, it took me around an hour to summit the west peak and return. The Take A Walk guide rated the track to the west peak as "Hard" (compared to "Moderate" for east peak) and suitable only for experienced, confident scramblers. However, I found it to be no more challenging than the east peak, and anyone who has made it this far will probably not have any trouble climbing the second peak (perhaps an easier route is now possible since the book was published?).

I descended to the saddle via the 'wrong' route that I took on the way up, which is an obvious track leading downhill in the direction of the west peak from the summit of the east peak. The path is fairly narrow but not exposed. In some sections you have to push your way through grass trees to keep to the path, and there is a very short scrambling section where handholds are difficult to come by, but otherwise I found it straightforward. There is a significant amount of dust on the path shortly before the west summit that gets kicked up a bit as you scramble through the bush. A bandanna or something similar would have been nice to keep out the dust.

At the summit there is a large, flat area and the remnants of a camp fire. Views are fairly limited but it is possible to look back towards the east peak by pushing through some grass trees.


After returning to the east peak, I located the 'true' track that leads back to the border fence (it's more obvious than the one leading towards the west peak). It was much easier to head back this way than by the roundabout route I took on the ascent. The image below shows the point where you need to climb up to avoid the precipitous path that contours around the base of the east peak that I accidentally took on the way up (you can see this vague path at the lower right). There is a bright pink marker on a tree branch but it is not obvious from below! 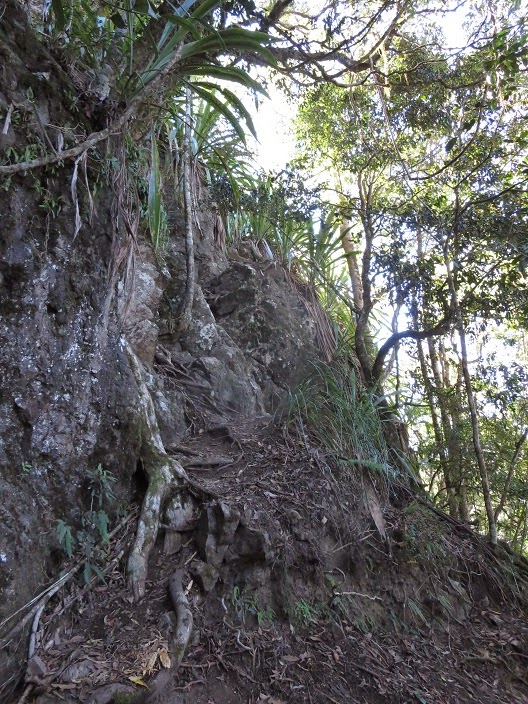 From there it took about an hour to return to the carpark. The path looked even steeper on the way down!


For the most part, this was a very enjoyable walk and the views from the east peak are among the best in south east QLD! However, the first half an hour of walking through high grass (particularly in early morning dew) is one of the least enjoyable sections of track I've had to trudge through, and wouldn't have me back again anytime soon.
Posted by Champion Munch, Lord of All the Mountains of the Earth and the Fishes of the Seas